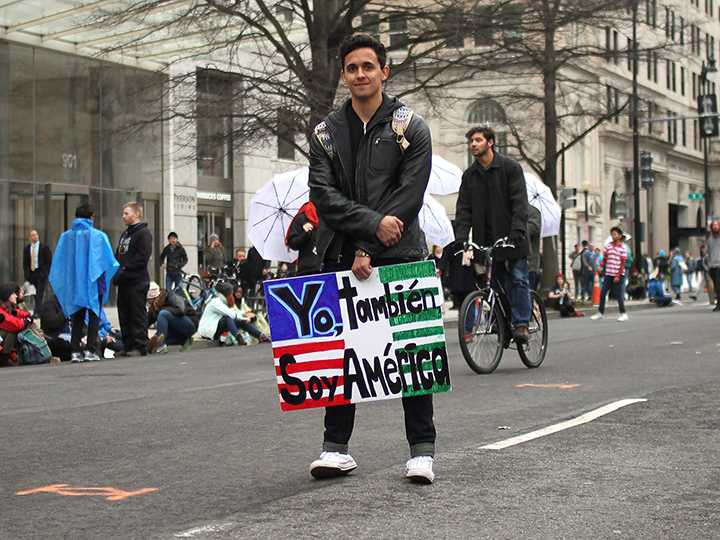 A young man holds a sign saying “Yo, tambien, soy American” which translates to “I am also American.”

Inauguration protests. The Women’s March. The travel ban protests. Betsy DeVos. With every new political action, protests seem to follow. But these protests have been met with “he won, get over it.”

Peaceful protest is a way for the government to know the will of the people and should be embraced, not denounced.

America itself wasn’t founded by us “just accepting” an oppressive regime. The civil rights movement didn’t start by people politely asking for equal rights. Protesting is one of the most American values we have.

Strict constitutionalists who support things like gun rights and protection from cruel and unusual punishment and unreasonable search and seizure should go reread the first amendment. One of the first five freedoms in the Bill of Rights is the freedom to peacefully assemble.

But the problem is, not everyone is peaceful. Instances of small groups of protesters breaking windows or lighting cars on fire become the focus of those against the protesters and take the focus off of the message.

The fact that women in other countries have fewer rights than women in America doesn’t mean we shouldn’t protest here. This doesn’t devalue their march, and it inspires women across the globe to join their cause. There were 4.2 million people in women’s marches across the U.S. and 261 marches outside of the country on Jan. 21.

Protesting is not a partisan issue. It’s a right guaranteed to both sides of the political spectrum.

Instead of protesting the protestors, stop and listen to what they have to say.