This One’s for Kate

Grad dies after fight with cancer, one week after crossing stage 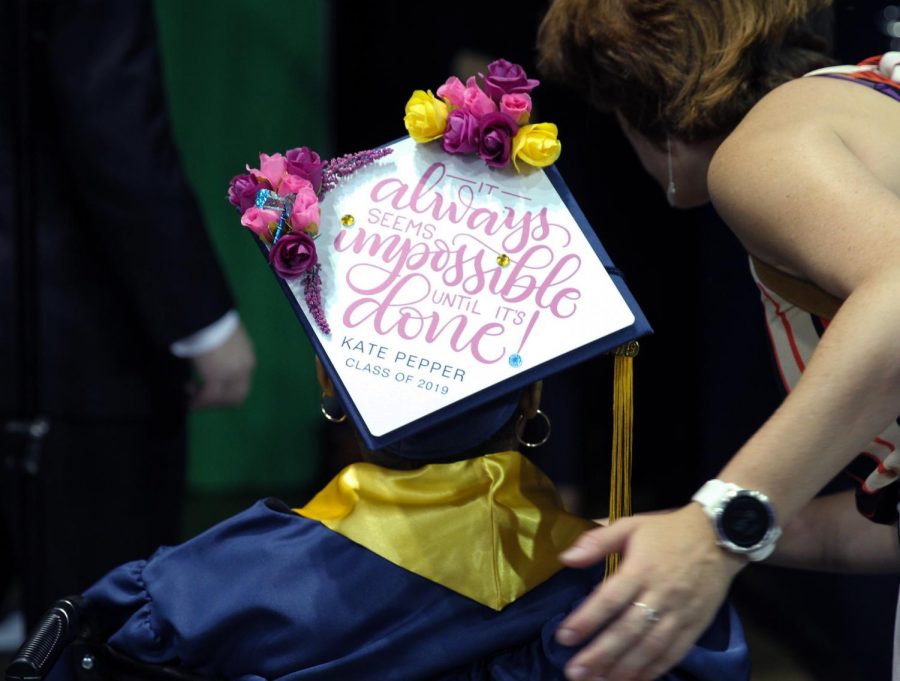 Kate Pepper decorated her cap with a meaningful quote.

Katilyn Pepper died Friday, June 7, of cancer one week after graduating with the class of 2019. The story below appeared in The Lion 2019 yearbook.

She gets out of the limo and approaches the Cotton Mill, her boyfriend right behind her – pushing her wheelchair into the building.

She sees her family first as they greet them in the entrance, taking photos of Kate in her bright yellow gown. After a day of hair, makeup and pampering, Kate was ready to spend the evening with the people she loved most. But nothing could prepare her for what was behind them.

As they turned left into the dance hall, more than 700 students and teachers screamed and clapped for the guest of honor.

Her mouth fell open in shock as the tears ran down her cheeks.

“Oh my God,” she said quietly before belting across the crowd, “Thank you. I love you guys.”

“I was so surprised,” Kate said. “I started crying as so as soon as I walked in because I was like ‘Oh my gosh! How did they get away with this?’ I just felt so happy.”

Kate has been fighting cancer since the 8th grade and was diagnosed with Anaplastic Astrocytoma, a brain tumor, in her Thalamus – the part of the Brain that relays motor and sensory signals to the cerebral cortex.

“This is a horrible experience to have a loved one be fighting for your life,” Kate’s mom, Tyliece Pepper said. “Katilyn has taught me to still keep my head up and fight with me graciously. She is still fighting and the one thing I get out of her ordeal is that you still have to fight and still be happy and still love life.”

It was English teacher Ms. Chelsea Boyd’s idea to throw an impromptu dance for Kate because her family was worried that she wouldn’t be able to attend Prom.

“To be honest, when we heard that news that her tumor came back, it was obviously extremely upsetting,” Ms. Boyd said. “A lot of her close friends and family were in the room as well as her great aunt. And when I saw her, she was just sitting in that hospital room and she kinda just looked at me and mouthed ‘what about the Prom,’ and I thought ‘Well I don’t see any reason why Kate can’t have a prom.’”

The entire dance was kept a secret from Kate, right up until the moment she arrived.

“Kate literally thought when she woke up on Friday was that the only thing she was doing was getting her senior pictures made,” Ms. Boyd said. “She knew she was getting her makeup done, and I’m not sure why she thought that Meredith from the news was there. When you have a brain tumor you don’t always think through all of the same things everyone else does. She didn’t really pick up on it. It was like the whole day to Kate felt like how it feels when your mom or dad starts putting the presents under the tree and you’re shaking them. Like you know something good is in there but you don’t know what it is, and I think it kinda felt like that for Kate.”

“I don’t have the words for what that was like. Overwhelmed is the best way to say it,” Ms. Boyd said. “I was overwhelmed the whole night, because when I walked in, and saw what the kids had done, that was overwhelming. To see that so many people volunteered their time, the DJs, the SROs that had to be there, we had never thrown a free dance like that one.”

It was a risk to put on the dance because it was free to the students and everyone was invited.

“It’s a risky thing to do because you’re saying to everyone, ‘come party,’” Ms. Boyd said. “And that message you send when you’re talking to teenagers is something. So we had no idea if a thousand kids were gonna show up and we were gonna have to shut down the place or if we weren’t gonna have enough, and it would hurt Kate. But as I watched 20 minutes before, there were enough kids in the dance hall ready, that it wasn’t going to hurt Kate.”

Soon after the Dance was put on, Tyliece took Kate on a trip to Paris.

“We went to all the main staples like the Eiffel Tower, Notre Dame and the Arch de Triumph,” she said. “All the places that everyone hears about. Kaitlyn was supposed to go to Paris on the school trip, but since she wasn’t able to go on it, I decided to take her myself.”

Ever since Kate was diagnosed with cancer again and has discontinued treatment, she continued to fight and live her life to the fullest.

“Since I just got paralyzed again, they have done a lot of things to help me and push me along the way,” Kate said. “As soon as people found out that I got cancer again they were wanting to help me and they have held my hand and that feels amazing. Through these hardships, I think I have found new friendships and new ways to push on. I don’t even know how to express it, everything has just been amazing and I am just happy.”